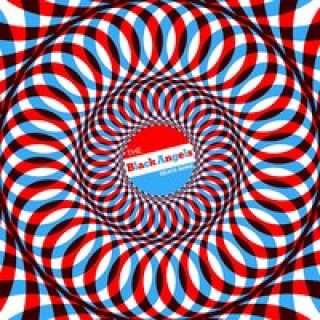 It only takes a single minute into the fifth Black Angels album for the now-familiar Black Angels sound to rear its head. Various permutations of the song’s (“Currency”) pounding mid-tempo groove and tom-heavy drums have been part of pretty much every Black Angels release going back to their 2005 debut EP. While that formula has created a strong “brand identity” for the band (Death Song is their third straight album to debut in the Billboard Top 100), it’s somewhat frustrating that they aren’t progressing from release to release, or delivering any surprises. As much as I like Death Song (the album – not the cheap Velvet Underground pun of the title) I’m at the point where I want The Black Angels to give me something more to consider than the same ol’ Velvets/Stooges/Spacemen 3/BJM/13th Floor Elevators-inspired sound I’ve come to know all too well from them. “I’d Kill For Her” and “Comanche Moon” put the formula to good use, with an inspired mix of Nuggets’y garage-pop song structures and narco-psychedelic noise-mongering. “Grab As Much (as You Can)” is great too, as long as you don’t pay close attention to the lyrics (never the band’s strength) and are OK with them stealing the guitar riff from Johnny Kidd and The Pirates’ “Shakin’ All Over.” “Estimate” and “Half Believing” are weaker, with attempts at a po-faced seriousness they don’t pull off convincingly. “Medicine” sounds a lot like Clinic, another VU-inspired band that spent part of the 2000s stubbornly putting out songs that sounded like minor variations of other songs they’d already released. Were Death Song the first Black Angels album I’d probably be a lot more excited by it, but, to quote Black Flag, “I’ve Heard It Before.”

How/why did the band come together? Music heals the soul. We all needed soul healing. We were all friends in Austin and we all dug the same kind of music, so we decided to use our talents together.

One of the things I really like about Passover (the debut album) is that it one of the few records in recent memory with overtly political songs. Are you guys politically active outside of music? Music/Art & politics go hand in hand. We are active everyday.

Have you run into any people who were pissed off by the political/anti-war songs on the album? Yes. We’ve had soldiers who fought in Iraq (who happen to be at the show) yell at us on stage and storm out of the venue, but weve also had soldiers come up and tell us how much our songs mean to them and how they connect.

If I started a band called Death Song could we tour together?

That would be awesome. Let’s do it.

What’s the funniest thing a heckler has ever yelled at you?

Fuckin’ Hippies. You weren’t even in Vietnam.

What exactly is a “drone machine”? That’s a secret.

Who are some of the other interesting bands in Texas at the moment? The Strange Boys from Dallas are our favorite Texas band. They sound like they came off the Nuggets box set.

Cheetah Chrome (ex-Dead Boys) is calling his back-up band The Black Angels….can we expect a massive lawsuit? There were only 6 Black Angels sent to this planet. All the others are posers.

What are some of your favorite albums to listen to high? As of recent the Psychic Ills, Dins, & Brightblack Morning Light’s debut album. Favorite classic album The Pink Floyd’s – Piper at the Gates of Dawn.

Why isn’t my review of your EP in the “press” section of your website? Because our webmaster gets lazy, and doesn’t put new shit up.

You guys have been touring the country pretty heavily for the past year, is that fun or does it get tiring after a while? We love it. Wed like to be on the road all the time.

What’s next for the band? Have you thought about your next album at all? We will be touring this fall with The Black Keys out East and then out West we’ll be headlining our own tour. The plan for early next year is to head to the UK, Europe, and Australia. As for the next album, weve recorded 7 songs and will finish recording the rest this September & October. So it should be out by early spring of 2007.

The third album from Austin’s biggest proponents of psychedelia since the 13th Floor Elevators is also their most varied. No, The Black Angels aren’t embracing electronica, Lil’ Wayne doesn’t drop a verse, and they aren’t adding a horn section. What they do on Phosphene Dream is allow some new colors, or at least some new shades, into the “Black Sabbath-playing-Sister Ray” template that defined their first two albums. So, instead of more of the same mid-tempo drone-psych that already felt repetitive (if still enjoyable) by their sophomore album, the band can nimbly go from a “Beatles at The Cavern Club” vibe on “Telephone,” to 1960s psych-blues on “Haunting At 1300 McKinley,” to the jangling Nuggets rave-up “Sunday Afternoon” (complete with 13th Floor Elevators-inspired electric jug runs) with an invigorated intensity and something close to, but not exactly, a sense of fun. Singer Christian Bland’s lyrics are also much improved, showing an understanding that sometimes you can say more with less. One part of the Black Angels’ formula they thankfully haven’t tinkered with is packaging, which, as always, combines hypnotic optical illusions with tactile elements to make Phosphene Dream a feast for the fingers and eyes, as well as ears.