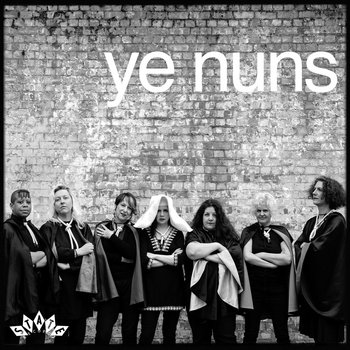 When I started reviewing music some fifteen years ago, I never considered the possibility that at some point in the future I’d be reviewing an all-female Monks tribute band, yet here we are. The Londen seven-piece – yes, there’s seven of ’em – don’t quite cover any actual Monks songs on this single, but rather two songs donated to the band by former Monk Eddie Shaw. Were these songs Shaw wrote back in the ’60s, or modern day recreations? Well, I don’t know – the liner notes don’t say. Regardless of vintage, what strikes me most about these songs, is how – much like the rest of The Monks’ music – they sound completely alien next to anything else that was happening in the ’60s, and there’s only one band that could be making these sounds. Ye Nuns keep all the hallmarks of the original Monks sound – the banjo, the pounding drums, the lumbering fuzz bass, and the hydrogen bomb blasting keyboards – gloriously intact. I don’t think they wear tonsures, but other than that break with tradition this is remarkably close to the original arty-fact.