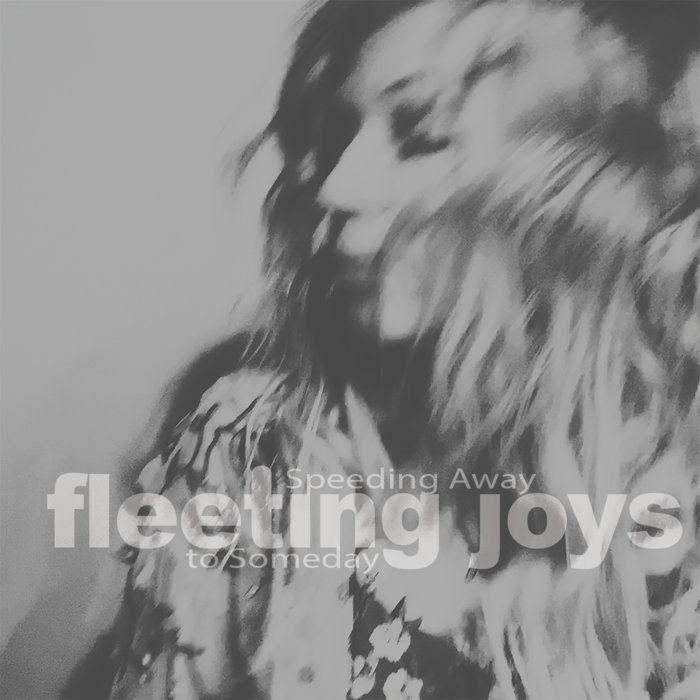 Fleeting Joys first two albums – 2006’s Despondent Transponder and 2009’s Occult Radiance – were some of the best shoegaze sound-bombs of the 21st Century. My original review of Despondent Transponder basically said it was the closest we’ll ever get to a follow-up to Loveless. Not the first time I’ve been wrong. Anyway, when the band – married couple John and Rorika Loring with some occasional help on drums – went silent after 2009 I figured they traded in music for a “normal” life filled with careers and raising a family. Once again, I was wrong. It wasn’t quite the twenty-two years My Bloody Valentine took to follow-up Loveless, but ten years later Fleeting Joys are back with a new full-length, Speeding Away to Someday.

You show up to a shoegaze album wanting mountains of beautiful noise made by an army of guitar pedals, and Fleeting Joys are more than happy to provide that thrill. John Loring deploys the full spectrum of sounds guitar geeks who worship at the altar of Kevin Shields, Mark Gardner, Andy Bell, and Neil Halstead want to hear, but Speeding Away to Someday offers listener so much more than that. For me the heart of the album is found in the vocals. Yeah, I know vocals are often thought of as an afterthought in the shoegaze world, and true to form, it’s often hard to decipher Fleeting Joys’ lyrics (“You Want To” is a crystal clear exception); but the way John and Rorika’s voices weave in and out of each other in layers of off-kilter harmony is unique, and it distinguishes them from their influences and contemporaries. It also sounds downright romantic at times, even on a song like “Kiss A Girl in Black” where the only lyric you can make out is the word “suicide”. “Come To” is a real treat too. It’s a drum-free ballad-of-sorts, built on a bedrock of sweeping MBV-style sheets of guitar sound, but with an Spacemen 3-esque orchestral quality that will have you wondering, “are those actually violins or just contorted guitar/synth noises?” all the while losing yourself in its world of beautiful sounds.

Each of these nine tracks are excellent, and if you like the bands Fleeting Joys compares to, then Speeding Away to Someday just may be the most important release of 2019 for you. It’s limited to 300 copies on handsome red sunburst vinyl, so act fast.

If you saw My Bloody Valentine’s reunion concert this past year and thought to yourself “That was great. Now what?” Occult Radiance may be the answer. The album uses a similar sonic palette to the one Kevin Shields and co. employed on Loveless – evident in the guitar textures and breathy vocals buried low in the mix – but the band (a duo of husband and wife John and Rorika Loring) also attack their songs a little harder than MBV ever did, kind of like the grunge-friendly shoegaze of Swervedriver or Dinosaur Jr. OK, so The Fleeting Joys rely heavily on their record collections for inspiration, but at least they use it as a launching pad for great songs and melodies. All eleven songs on the album are strong, but it’s hard not to be bowled over by the dreamy vocal coos mixed with viola-like guitar squalls on “Cloudlike Mercury,” and the backwards-vocals crossed with pounding drums on the chorus of “Closer To My World Without Pain.” If you love shoegaze (and if you’re still reading this, chances are very good you do), then head over to their Myspace page (http://www.myspace.com/fleetingjoys) for info and sounds.

At this point I think it’s pretty safe to say that My Bloody Valentine won’t release a follow-up to Loveless. There have been some glimmers of hope in the past few years – tales of the band reconvening in the studio have occasionally circulated around the internet – but it’s just not going to happen. This is where California’s Fleeting Joys come into the picture. The group has My Bloody Valentine’s Loveless-era sound down to a “t”. The dense fog of disorienting guitars, the powerful drums, hard to understand vocals that could be coming from a man, a woman, or both….it’s all here. Seriously, you could pass these nine songs off as a collection of unreleased My Bloody Valentine tracks and nobody would know.

Sounds pretty pointless, right? Wrong. If the Fleeting Joys were just copying Kevin Shields and Co. without doing anything interesting with it, it would be easy to ignore them. However, The Fleeting Joys have some top-notch tunes. In fact, a few songs are as good as anything on Loveless (“Go and Come Back,” “Patron Saint,” and the awesome instrumental “I Want More Life FKR”), and that’s no light praise. They don’t have a record deal yet (Only Forever is the band’s own label), but they should. Hell, I’d sign ’em if I knew how to run a label! Given a proper recording budget, they could put out a classic.