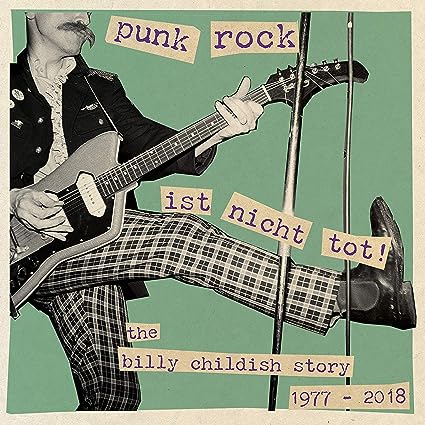 Forty-eight songs should be more than enough space to anthologize a musician’s output – even four decades’ worth – but for Billy Childish, whose discography includes over 100 albums (he’s a prolific visual artist, poet, and author as well), it’s a simple scratching of the surface. With so many different Childish bands and albums to cover, Punk Rock is Nicht Tot! is best treated as a sampler of some of the man born Steven Hamper’s career highlights, from his earliest lo-fi recordings with the Pop Rivets from 1977, all the way through to music he recorded last year with his current band CTMF. The band names may change every few songs, but there’s a very distinctive artistic aesthetic at work throughout, derived largely from early Kinks, Link Wray, the first few punk singles, Bo Diddley, Chess Records, and pre-psychedelic garage rock, as well as some unexpected detours in ska, folk, soul jazz…basically, every form of raw music from the past 65 years that can be played by bands (he’s not rapping) has a place somewhere in the Childish universe, where they get filtered through his unique lyrical worldview consisting of angry punk sentiments (“You Make Me Die”), deeply personal reflections from his life (“Christmas 1979”), and a recently increasing interest in obscure history (“Headlong Fly The Aceans”).

Punk Rock is Nicht Tot! gives Childish newbies an opportunity to figure out where you want to start building your Childish collection. Do you want the early Who-isms of The Buff Medways, the Kinks/Link Wray gone punk of Thee Headcoats, the all-female Headcoats offshoot Thee Headcoatees, or any of the eighteen other projects covered here? True, Childish has covered a lot of musical ground over the past forty years, yet it’s all but impossible to detect any artistic growth or hear any sonic indicators of when any of this music was recorded. The track-list might follow Childish’s output in chronological order, but, with exception of his punk beginnings in The Pop Rivets, you could pretty much play this collection in reverse order and not notice any difference in the performances or songwriting over time. Not that any “development” is needed, or even wanted, in this case. Childish clearly found his corner of the music universe early on, and has been tending to it ever since, ignoring all trends and flavors of the month, except to occasionally goof on them in songs like “A Song for Kylie Minogue” or the curiously omitted “We Hate The Fucking N.M.E.” The best part is, he’s still out there making great art (a new “Wild” Billy Childish album with CTMF comes out in just a few weeks) and you don’t have to have much of an imagination to guess what it will sound like, or worry if it will be any good…it most definitely will.