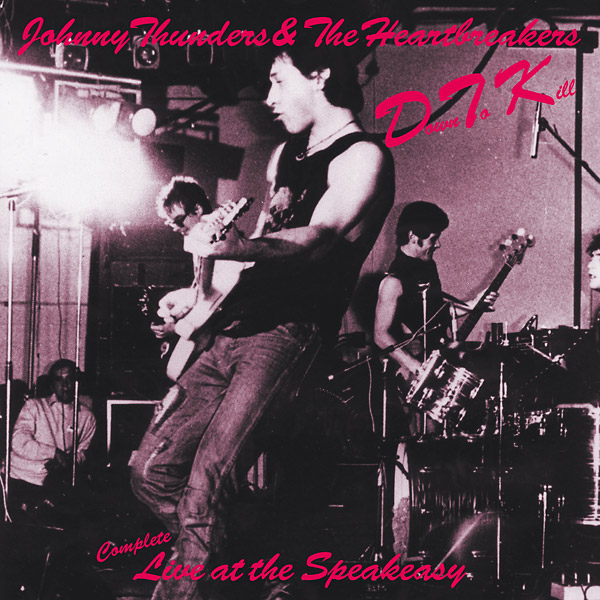 DTK (that stands for Down To Kill, folks) captures Johnny Thunders and The Heartbreakers live at London club The Speakeasy in March of 1977; the same month they would record their timeless studio debut, L.A.M.F. You get the full audio side of the Heartbreakers live experience on this album – the band plays with rock and roll chops that harken back to the ’50s and ’60s, but cranks it up with punk attitude and speed (in both its velocity and chemical-based definitions). Plus, you get to hear Thunders and guitarist Walter Lure berate the audience, and occasionally each other, with Noo-Yawk accented in-between song put-downs, along with a few other vulgar asides peppered in. It’s a great proposition, but if you’re looking for the best Heartbreakers live album, go with Live At Max’s, which was recorded a year later on home turf in NYC and also put out by Jungle Records. The sound on DTK is good, but the Max’s disc sounds fuller and it has a better setlist. DTK is actually two short sets recorded on the same night, with significant overlap between them. So, even though there are 15 songs in total, five are repeat performances. Still, The Heartbreakers were so white-hot at their peak you could give me a lo-fi album of them playing “Get Off The Phone” fifteen times back-to-back and it would still be a livewire listening experience, dripping with the spirit of rock and roll.
In addition to the two sets, the DTK package has Kris Needs’ original liner notes from 1982, and a more recent interview with the last Heartbreaker standing, Walter Lure, conducted by Thunders biographer Nina Antonia.

L.A.M.F. (an acronym for Like A Mother Fucker) has been a contentious album ever since it was released on Track Records in 1977. It should have been a victorious moment for Johnny Thunders and his band of hard-living New York street rats, but a muddy mix led to a muted reception from audiences and critics (though guitarist Walter Lure states in the liner notes that the sub-par sound stemmed from the tape-to-vinyl transfer, and not the mix). How bad was the original mix? Well, it drove drummer Jerry Nolan out of the band, and the album was remixed several times over the past few decades. That bad. It’s a shame too, because the songs are great. In the ’90s an alternate version of the album called L.A.M.F.: The Lost ’77 Mixes showed up, with sharp mixes confirming what people who saw the Heartbreakers live already knew – the band were a juggernaut, steeped in rock’n’roll history but playing it with amphetamine-aggression and enough attitude to put them at the forefront of the punk movement (both in the U.S. and U.K.). Each song is a classic, with “Born To Lose”, “Chinese Rocks” and “Pirate Love” among the most iconic tracks of the punk era.

The new “Definitive Edition” of L.A.M.F. from Jungle Records is a robust package, with a whopping four discs, a 44-page booklet, and four pins. The first disc is the “Lost ’77 Mixes” version of the album (the best way to hear it in my opinion). The second disc is original mix of the album, remastered and with the “mud” removed, although it still sounds pretty muddy to me. The third disc collects 13 demos from three different sessions. There are two songs – “Flight” and “Take A Chance” – that didn’t make the final album, as well as four songs from an early-1976 session with Richard Hell on bass, making this a nice companion piece to the original album. The final disc is yet another 21 alternate mixes of the same songs. While simply buying the “Lost ’77 Mixes” might be a more economical choice, and the seemingly endless variations on the same 13 songs is overkill, L.A.M.F.: Definitive Edition is a handsomely compiled set and hopefully the final word on a great album.

Born To Lose, Baby Talk, All By Myself, I Wanna Be Loved, It’s Not Enough, Chinese Rocks, Get Off The Phone, Pirate Love, One Track Mind, I Love You, Goin’ Steady, Let Go, Can’t Keep My Eyes On You, Do You Love Me.

Born To Lose, Baby Talk, All By Myself, I Wanna Be Loved, It’s Not Enough, Chinese Rocks, Get Off The Phone, Pirate Love, One Track Mind, I Love You, Goin’ Steady, Let Go.

I Wanna Be Loved (mix 2), Pirate Love, Goin’ Steady, Flight, Born To Lose, Can’t Keep My Eyes On You, It’s Not Enough, I Love You, Take A Chance, Do You Love Me, Let Go, Chinese Rocks, Born To Lose.