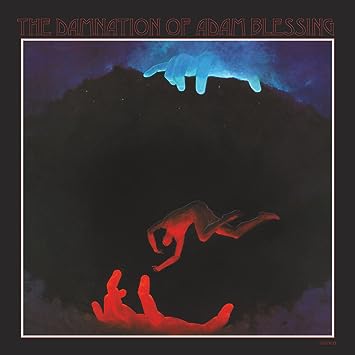 Cleveland outfit The Damnation of Adam Blessing were a popular local act but didn’t trouble the waters nationally all that much when they released these two albums back in 1969 and 1970. Like many bands operating at the time, their self-titled debut and follow-up, Second Damnation capture the sound of experimentation and transformation, as the band were looking beyond their previous psychedelic and garage rock incarnations (members had played in The Alarm Clocks and Dust), and embracing the oncoming heaviness of The Jeff Beck Group, Mountain and Cream.

Their debut album is a personality crisis of a record that will have you wondering just who these guys really were. Were they the hard-rocking psychedelic voyagers you hear on strong tracks “Cookbook” and “Le’ Voyage” (the latter of which has a bit of an MC5 feel to it)? Were they a good-time rock band looking for easy thumbs ups from stoned concert audiences, as demonstrated by uninspired covers of “Morning Dew,” “You Don’t Love Me,” and “Last Train To Clarksville”? Or were they looking to split the difference between those two sounds as heard on the album ending trio “Dreams,” “Hold On,” and “Lonely”? Clearly, the band were sending mixed signals. The only constant was singer Adam Blessing (real name Bill Constable), whose voice was forceful without resorting to the over-indulgent histrionics that sunk so many other hard-rock bands from that era. He would have benefitted from a better backing band though. Don’t get me wrong, these guys were perfectly competent musicians, but also too timid to make a lasting impression.

Released less than a year later, Second Damnation is a much stronger album. The band were road-hardened, including a recent spot at the Cincinnati Pop Festival (site of the famous Iggy Pop peanut butter incident) in front of tens of thousands of fans. The album was more cohesive and the songs hit harder than anything on their debut. The same band that sounded tentative just a few months earlier now sounded limber and in complete control over the nuances of dynamics and tempo. “Driver,” a hard-hitting beast of a song, stands out above the rest, but even a tender ballad about loneliness (“Ken”), featuring vocal harmonies from Adam’s brother Ken, works this time out. “Back To The River” was a snappy little tune that got to #102 on the Billboard charts, but that was as far as the band would go. Frustrations quickly arose within the ranks due to poor distribution and a lack of national touring opportunities. Two more albums followed (including one under the name Glory) before they called it quits.

The new vinyl reissues were sourced from the original masters, so they sound phenomenal. There’s no extra material, but both feature informative liner notes by Doug Sheppard of Ugly Things Magazine.