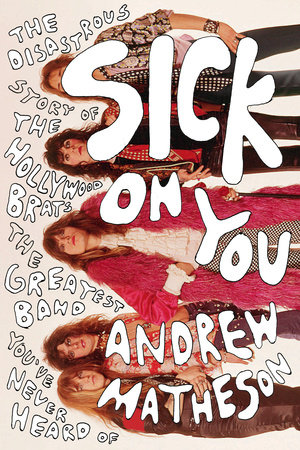 It’s hard to believe someone agreed to publish a book on The Hollywood Brats, considering the band’s sole album – a 1974 glammy proto-punk classic – was only released in Norway, where it sold just 563 copies. Despite their obscurity, the book exists, and it’s a great read to boot. Author, and Brats singer, Andrew Matheson never wrote a book before, yet he tackled Sick On You without a cowriter. Despite his inexperience, he’s got an immediately enjoyable writing voice – part self-deprecating comedian, part arrogant rock-star and part street urchin – and a ton of great stories about the highs and lows of his almost single-minded attempts at getting a flamboyant Stones/Kinks circa-’67-meets-glam band off the ground in dull and depressing early-’70s England. His wild tales include dodgy gigs, even dodgier living situations, mafia-owned record labels, punch-outs with Freddie Mercury…and, like his run-in with Freddie Mercury, he pulls no punches. He’ll tell you exactly what he thinks at all times, even when his opinions fly in the face of accepted wisdom. Unfortunately those opinions occasionally have him engaging in cheap ethnic stereotyping that rubs you the wrong way. Cut those parts out (and boy, I wish you could) and he’s got a great book on his hands – it’s no wonder Mojo Magazine named it their 2015 Book Of The Year. I bet it would make a great movie too.