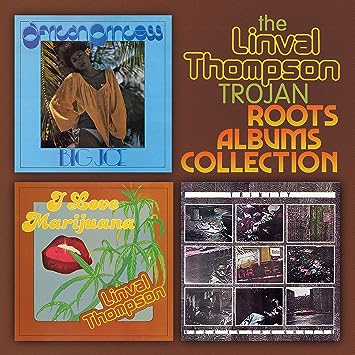 Let me try to make sense of this confusing 2-CD collection. It’s actually a compilation of three different reggae albums – Linval Thompson’s I Love Marijuana, Big Joe’s African Princess, and Trinity’s Rock In The Ghetto – with ten bonus tracks. The common thread across this music is that it was all released on Trojan’s Attack label between 1978-1980 and feature Linval Thompson, who first rose to prominence as a vocalist in the mid-70s, but found himself shifting more towards production as the decade drew to a close. It was an exciting period in reggae; the roots sound was still dominant, but dancehall was starting to bubble up from beneath the surface.

The title track of Linval Thompson’s I Love Marijuana is tremendous – as powerful a reggae ode to the virtues of marijuana as Peter Tosh’s “Legalize It” – but Thompson’s silky almost-falsetto vocals are a real treat throughout the eleven songs. The topics Thompson tackles may be overly familiar to anyone with a sizable collection of ’70s reggae – ghetto politics, peace, love, women, and weed, with surprisingly little Rastafarianism – but the songs are snappy and sincere. You can really feel the heat and the poverty of Kingston pouring off these tracks. In addition to his own original compositions, Thompson sings a pair of tunes penned by Ken Boothe (“Not Follow Fashion” and “Just Another Girl”), and “Starlight” by Sly Dunbar and Robbie Shakespeare.

Thompson produced Big Joe’s African Princess, which also came out in 1978 and repurposes some of the musical tracks from I Love Marijuana as backing tracks for the man born Joseph Spalding to toast over. I’m not crazy about toasting in general (if you’re unfamiliar with the style, which is also known as “chatting” or “deejaying”, think of it as a Jamaican precursor to rapping) and Big Joe isn’t one of the bigger talents in the genre either, lacking the flash and finesse of someone like Big Youth, U-Roy or Doctor Alimantado. I like how Thompson uses echo to give Joe’s voice a booming, almost biblical, feel; but that’s not enough to make African Princess a must-hear album.

Trinity’s Rock In the Ghetto is, again, a Thompson-produced toasting album, but this one was came out in 1979. It’s a smoother sounding album, and Thompson’s production inches even closer to dancehall, keeping the vocals upfront and unclouded by echo, and the music tracks super crisp and punchy. Trinity is a better toaster than Big Joe, too. Sure, he stubbornly sticks to the same over-used vocal cadences and lyrical tropes that you hear on most toasting records from the ’70s, but songs like “Pope Paul Dead and Gone” – which appears on the album, and in extended disco-mix form as a bonus track – and “Dangerous Rockers and Ting” showed that Trinity could step outside genre conventions and take a more unique lyrical approach.

The ten bonus tracks are a nice addition too, including Barry Brown’s classic “Mr. CID” and some spaced-out dubs from Scientist.