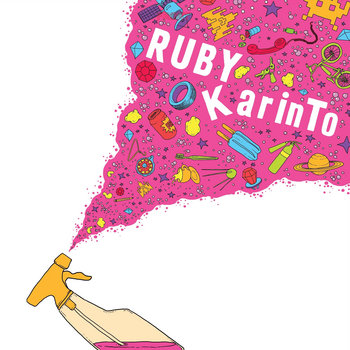 Everything about Ruby Karinto’s debut album seems designed to simultaneously confuse and stimulate. Even their name is puzzling – nobody in the band is named Ruby Karinto, nor are any hints given to what it means. The four members of Ruby Karinto are only listed by their first names, so we barely even know who they are! Their sound is hard to pin down too. There are reference points like ESG, Yamasuki, and maybe some of the weirder stuff Grand Royal put out in mid-’90s, but this is a unique spin on all of those inspirations. Ruby Karinto have no guitar player, instead the band is built on bedrock of bass and drums keeping a thumping backbeat, while all manner of swirling synth and electronics sounds swoop in and out of the picture and singer “Ai” chants, sings, and talks on top of it all. Oh, and did I mention that half of the songs on the album are in Japanese? Side two offers a few clues on the origins of Ruby Karinto’s sound, though you’d have to be a black-belt music geek to pick up on them. Specifically, there’s an excellent cover of “Always Now” by Section 25 and a song called “No Manchester” that does in fact resemble the caustic sound of the No New York compilation, gone Manchester post-punk. As challenging as Ruby Karinto’s music may sound on paper, it’s actually easy to digest and infectiously danceable too, proving that you can stimulate minds and asses at the same time.