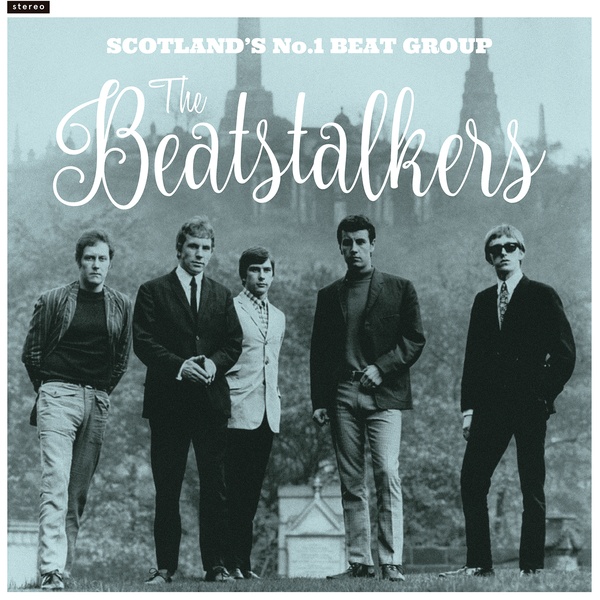 The Beatstalkers were, if this album title is to be believed, Scotland’s number one beat group. The Glasgow five-some’s origins date back to a pair of 1963 demo tracks recorded  when the band members were still in their mid-teens, and those songs are tacked on to the end of this career-retrospective. However, despite getting Beatles-mobbed by fans on the local concert circuit, The Beatstalker’s career didn’t really take flight until 1965 when they put out their first single for Decca, “Ev’rybody’s Talkin’ ‘Bout My Baby”. Sure, the song’s title has too many apostrophes, but the tune is tremendous, with a great organ riff and Dave Lennox’s confident blue-eyed soul vocals all splitting the difference between the hard-edged R&B of The Animals and the The Hollies’ pop smarts. The band would release a total of seven singles before calling it quits in 1969 when their equipment van was stolen. All those singles are here, but despite their popularity with young, mostly female, fans, musically they never topped their first single. “You Better Get A Hold On” stomps hard enough to approach the high watermark, but for the most part The Beatstalkers were pleasant, but unexciting, mod-soul lightweights. Take “Mr. Disappointed” for example: it’s a limp white-washed take-off on Otis Redding’s “Mr. Pitiful” that’s weaker than the original in every way possible.

As 1966 turned over to 1967 the Beatstalkers mostly avoided the exciting sounds of freakbeat and psychedelia, and instead stayed on the pop-minded path they hoped would lead them to financial success. Their manager Kenneth Pitt suggested they record a few songs by one of the other artists in his stable, David Bowie. Yup, Bowie. The idea of these Bowie songs sounds great on paper, but this was pre-Space Oddity, before he really found his voice. Sure enough, the three Bowie-penned songs covered (“Silver Tree Top School For Boys,” “Everything Is You,” and “When I’m Five”) were ultra-fey psych-light nobody needs to hear more than once (though you can clearly hear Bowie adding background vocals). It’s not as if the band were writing anything better though; bassist Alan Mair’s “Sugar Chocolate Machine” is as awful as its title. They bowed out in 1968 with a decent cover of The Action’s “Little Boy” that displayed a little more depth than their typical releases, but did nothing to reverse their fading fortunes. After the band broke up guitarist Eddie Campbell would play in Mustard, Tear Gas and The Sensational Alex Harvey Band, and Mair resurfaced years later playing bass with The Only Ones, one of the most exciting bands of the punk era.