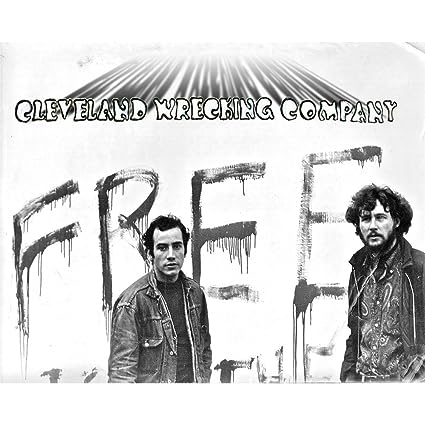 Cleveland Wrecking Company were a Bay Area band who played the local circuit with a lot of big names from the ’60s (Grateful Dead, Santana, Joplin, CCR…etc.), but saw their chances at stardom destroyed when their manager took an album advance from Vanguard Records to Mexico to buy pot. Sure, he planned on selling that pot back in the U.S. and using the profits for studio time, but he got burned on the deal and came back with bupkis. So, outside of a 7″ released by a later incarnation of the band with different members, all we have to remember Cleveland Wrecking Company’s prime by is this two-song 7″ recorded circa 1967-1968 (they don’t remember the exact year, this being 1960’s San Francisco and all). Side A is a studio recording of a garage rock number called “Say There’s A Reason”, which isn’t much from a songwriting perspective, and Jim Moscoso’s quasi-mystical lyrics don’t quite work in 2016, but things pick up when the band goes into a thundering instrumental passage that recalls Iron Butterfly and Blue Cheer, complete with all the fuzz guitar your little heart could possibly desire. The B-side is a live recording of “Hat Full Of Dreams” from either The Fillmore or The Family Dog (again, they were probably too stoned to remember). The guitar is way up-front in the recording, but despite an uneven mix – if you try real hard you can almost hear the drums – the acid-punk spirit comes through, especially in Norman Beals’ guitar solo which borders on free-jazz atonality. Despite their obvious imperfections, these two songs are an interesting time capsule of a freewheeling era, and they’ve got me wondering what could’ve been if the Cleveland Wrecking Company actually got to record that album. I guess we’ll never know.