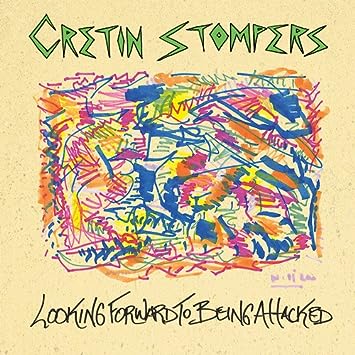 Let’s cut to the chase – this album is insanely good. Imagine if you will, a trio of bongs that somehow became sentient beings and formed a psychedelic rock band. And suppose that this bong-band’s singer sometimes fed their vocals through some kind of high-pitched effect (which may just be a sped up tape) that gave it a unique, and often startling, sound. Well, that band might sound something like the music on Looking Forward To Being Attacked. Cretin Stompers has its pedigree in recent-ish garage groups – Billy Hayes played with Jay Reatard, Alex Gatez in Wavves, and they’ve got a dude going by the name of BigMuff who played in BigMuffRadio and The Delay. The album has some punkier numbers, like “Adult Child” and “Cretin Ate My Neighbor,” but they’re so noise-damaged that even the Butthole Surfers would have to tip their cap in deference. Beneath all the lunacy (which extends out from the music into the trippy/goofy record sleeve art) lies a serious knack for writing earworms. “Eye Of The Storm” and “Watch Sally Run” could even pass for Super Furry Animals tunes – and the way the latter segues into the bizzaro funk of “Dream Blood” is just one great weedy moment on an album of many. Super-obscuro covers of The Styrenes (“Drano In Yr. Veins”) and “Sweet Obsession” by Dave Brock of Hawkwind just add to the disturbed fun.

How much did I like this album? Well, I’m reviewing it now, even though it came out in 2014. Why? Because, maybe if more people hear it, they’ll make another. Oh, and the cover art is by legendary Memphis photographer William Eggleston – one of his photos is the cover of Big Star’s Radio City – which is just icing on the cake.