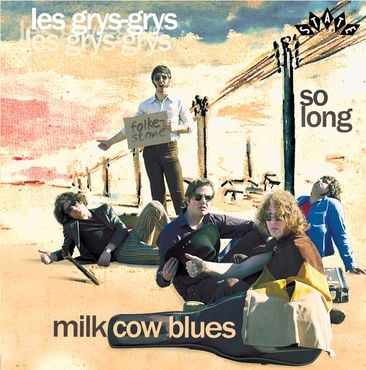 This two-song single should keep fans of this French garage rock quartet engaged while they get their sophomore album ready for release. The a-side is a cover of “Milk Cow Blues,” a blues song that probably predates recorded music, but began showing up on records in the 1930s. Since then, the song has evolved into a garage rock staple, with the Kinks and The Chocolate Watchband both recording quintessential versions in the mid-’60s. Aerosmith even turned in a smoking (albeit Kinks-indebted) hard rock version a decade later on Draw The Line. Les Grys Grys’ cover also sticks closely to the Kinks’ version, but the band attacks the song plenty hard and adds some extra guitar accents for good measure. The flip-side, “So Long”, is an original but it feels familiar, almost like a cover of a long forgotten song, that’s how well these guys recreate the sound and explosive energy of mid-’60s garage and r&b. It’s a short 7″ (six-and-a-half minutes in total), but it leaves an impressive mark all the same. If garage rock is the straw that stirs your drink, then Les Grys-Grys are your band.