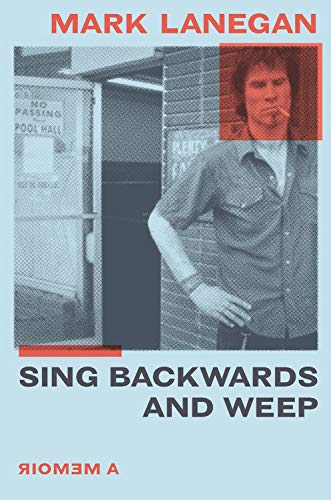 As a longtime Mark Lanegan fan, I knew he had enough stories for a great autobiography. After all he was part of the SST-led underground rock scene of the ’80s, the mainstream alternative boom of the ’90s, and he’s collaborated with just about every musician from the last thirty-five years that you’d want to read about. Somehow Sing Backwards and Weep managed to blow away my admittedly high expectations, and I breezed through its 341 pages in just two days. The story starts in Ellensburg, a dead-end Washington town where Lanegan was on the fast track for trouble early, having spent most of his teen years drunk, stoned, getting into fights, and amassing a hefty rap sheet. Discovering punk rock showed him that perhaps there was something more in the world for him than just getting fucked up and going to jail. Or at the very least, it gave him the idea that he could find kindred spirits to get fucked up and go to jail with…and that’s the path he chose. Of course The Screaming Trees are a big part of the story, as they’re probably the most commercially successful thing Lanegan has been a part of, but many will be surprised to learn that he’s embarrassed by most of their musical output (he’s not wrong either) and he especially couldn’t stand guitarist Gary Lee Connor, who is painted in an unflattering (and often comical) light. Despite feeling completely alienated from the band he was supposed to be leading, Lanegan still has great stories from their early years, including Greg Sage of The Wipers making (non-musical) overtures towards their boyish-looking drummer Mark Pickerel, Mike Watt’s penny pinching tactics on their tours with firehose, and his encounters with pre-Sub Pop Nirvana. There’s even the revelation that Krist Novaselic actually wanted to leave Nirvana for The Screaming Trees at one point. Luckily, Lanegan could tell early on that Nirvana had something special, and as much as Novaselic would have been a great pick-up for his band, he knew enough to tell him to stay put where he was.

As the ’90s began things were looking up for The Screaming Trees, with a major label deal and a lot of attention being paid to Seattle bands. However, Lanegan, ever the contrarian, went in a completely different direction from his radio-friendly alt-rock peers, launching a solo career inspired by quieter, more introspective music like Nick Drake, Galaxie 500, Leonard Cohen. Unfortunately, the pressures of a real career brought out the worst in an already dysfunctional group, and Lanegan began diving deep into drugs, alcohol, and kink; and that’s where the book takes a really dark turn. Soon he became the old cliche of going from a musician dabbling in drugs to a drug addict dabbling in music. While his friends were off conquering the world (and finding their own personal hells inside the trappings of success), Lanegan spent the next few years going off the deep end on heroin and crack, coming close to death several times. By the back-half of his ’90s his band was sputtering to a halt, whatever money he made from album sales and touring was gone, and Mark was dealing drugs just to get by. Lanegan hit rock bottom in 1997, ending up virtually homeless until Courtney Love paid for him to go into rehab, and Duff McKagan (who Lanegan had never met before) offered to get him off the streets by letting him be a caretaker at his homes in Los Angeles and Seattle.

The hardcore depths of drug addiction are brutally dark, and reading about them can be grueling, but these years were not without humor. For every shot of dope there’s a hilarious quip or story, like Lanegan’s encounters with Liam Gallagher’s cocaine-fuelled arrogance on tour with Oasis. After Gallagher made a few disparaging remarks, Lanegan spent most of the tour plotting his revenge, only to find Liam was never seen without a team of bodyguards. The book ends abruptly with Lanegan getting the news of Layne Staley’s drug-fuelled death in 2002, which is a shame because the past eighteen years have seen him get sober, build an inspired solo discography, get married, become a sought-after collaborator, and just generally get his life together. Sing Backwards and Weep could have benefitted from that redemptive ending, but maybe he’s saving that for sequel? One can only hope. 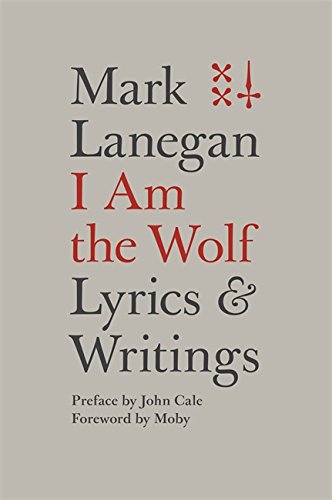 I’m not sure if lyric books are relevant in the internet age, but still it’s nice to have a collection of lyrics from Mark Lanegan’s solo discography to display on your bookshelf. The lyrics are presented chronologically by album, starting with 1989’s The Winding Sheet, up through Gargoyles from earlier this year. Lyrics from collaborations and one-offs are included too. This is all good and well, as are John Cale’s preface and Moby’s foreword, but the best parts of I Am The Wolf are Lanegan’s short passages at the beginning of each chapter on the making of each album. They provide brief, but fascinating, snapshots into his often-chaotic lifestyle and sources of inspiration at that given point in time. Lanegan doesn’t seem like the kind of guy who’d write a full autobiography, so this may be our best opportunity to know a little more about the man behind one of the best discographies of the last thirty years. Recommended for fans.

There’s a significant difference between Mark Lanegan’s solo albums and Mark Lanegan Band albums. Mark Lanegan’s albums, which go all the way back to 1990’s Winding Sheet, are folkier, with his Jim Morrison-meets-Tom Waits croon surrounded by more organic instrumentation. He brings the same vocal tools to the Mark Lanegan Band’s albums, however, the music behind him is built around programmed electronics. Luckily, his Lanegan’s idea of an electronic sound isn’t sleek, but rather they present an alternate timeline where he spent the back half of the ’80s fronting a New Order / JAMC / Bunnymen type of band, instead of Seattle neo-psychedelic hard rockers The Screaming Trees.

Gargoyle is his fourth Mark Lanegan Band album and it picks up exactly where 2014’s Phantom Radio left off. The lack of progression may be off-putting for some, but Phantom Radio was my favorite album of that year, so I’m thrilled to hear more of the same on Gargoyle. The man affectionately known among fans as “Dark Mark” and his rotating cast of supporting musicians (including past collaborators Alain Johannes, Greg Dulli, and Josh Homme, among others) are right in their narco-gothic wheelhouse with the opening duo of “Death’s Head Tattoo” and “Nocturne”. Both are great, even if the song-titles sound like they were made by a Mark Lanegan Song Title Generator. “Emperor” and “Beehive” upbeat, at least by Lanegan’s standards. The former closely resembles “The Passenger,” and the latter sounds like a lost alternative rock radio hit from 1987, with some of its sound and style tastefully borrowed from Echo and The Bunnymen’s “Lips Like Sugar” and The Jesus and Mary Chain’s “Sidewalking.” Lanegan brings the tempo down on slow-burners “Sister,” “Goodbye To Beauty,” and “First Day of Winter.” Those with a keen ear and a great record collection will notice that “Sister” lovingly recreates the harmonies from Wire’s “A Mutual Friend” towards the fade-out.

Despite personnel and influences changing from song to song Gargoyle is a very cohesive listening experience. It’s the combination of Mark’s unique vocal register and lyrical approach that tie it all together perfectly, and as of right now (May 19th), it gets my vote for best new album of 2017.

Mark Lanegan is a man of many projects, but I like his solo work the best. It’s where his songs have an added element of intimacy that place him in the same discussion as Nick Cave, Tom Waits, and Leonard Cohen. He’s been sporadically releasing solo albums since 1990’s The Winding Sheet, and so far they’ve all been great. Knowing that, I approached Phantom Radio with a bit of trepidation, brought on entirely by pre-album press naming New Order (a band I’ve never liked) as an influence and noting that the album began with recordings on an app called Funk Box. Was Lanegan about to go electro-pop?

Thankfully the answer is no. While much of Phantom Radio is built on a foundation of programmed beats and other electronica sounds, it’s nowhere close to vapid dance-floor fodder. The music is heavily influenced by the hypnotic proto-electronica of Kraftwerk, which pairs perfectly with Lanegan’s deep vocals and darkly introspective lyrics. In fact, this may be his best batch of songs in twenty years. The only time I hear anything resembling New Order is “Floor of the Ocean,” which has a bass-run that can only remind you of Peter Hook – but, unlike New Order, this song has a good singer and good lyrics. “Torn Red Heart” is, for me, the album’s centerpiece; a heart-wrenching ballad with a heavenly trajectory that could just as easily have come from Spacemen 3 as Mark Lanegan. It ends with the hard-driving “Death Trip to Tulsa,” a title that references songs by The Stooges and Neil Young, which is a pretty great combo. Each of Phantom Radio’s ten songs are among Lanegan’s best and as of today (November 1st) it’s is my favorite album of 2014.

The promo CD given to press includes the five-song No Bells On Sunday EP, which you should get if you can find it. Standout tracks include “Dry Iced,” a hypnotic number sporting traces of Suicide’s “Cheree,” and the ethereal title song which has a Joy Division funeral-march vibe to it.

Mark Lanegan has spent almost thirty years now as a vocal jack-of-all-trades, lending his weighty (and increasingly rough-edged) voice to a variety of projects running the stylistic gamut from electronica to folk to hard-rock, and many points between. Imitations is his eighth solo album, and his second album of covers (the first, I’ll Take Care Of You, is highly recommended). On it, Mark tackles songs from his parents’ record collection that informed his own approach to songwriting. It includes Lanegan-ified takes on Sinatra (both Frank and Nancy, with covers of “Pretty Colors” and “You Only Live Twice,” respectively), no less than three Andy Williams songs (“Lonely Street,” “Autumn Leaves,” and a heartbreaking “Solitaire”), and a stripped down reading of “Mack The Knife” that falls right into Lanegan’s wheelhouse. Mark also nods to some more recent songs with similar themes, such as John Cale’s “I’m Not The Loving Kind” (the album’s first single), Nick Cave’s “Brompton Oratory,” and Chelsea Wolfe’s “Flatlands.” He even reworks his Gutter Twins partner Greg Dulli’s “Deepest Blue” into a grizzled soul gem. Imitations’ deeply introverted performances probably won’t court a huge audience (there are no Jay-Z guest spots, although celeb watchers will note that Duff McKagan plays bass on three tracks) but Lanegan’s solo albums always pack an emotional punch and Imitations is no different.