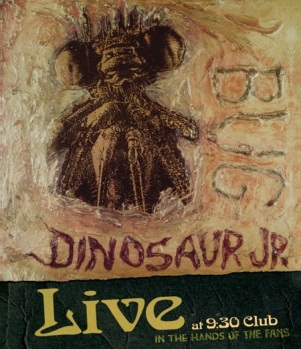 This is an appealing concept: Dinosaur Jr. performing Bug in its entirety at DC’s 9:30 Club (one of the best venues on the East Coast) filmed by six mega-fans. The first thing you’ll notice is how tight the band sounds and how well the DVD captures that sound. Seriously, forget about live shows…most bands would kill to sound this crisp in the studio! J Mascis, Lou Barlow and Murph look a lot older since Bug came out in 1988 (Mascis in particular looks like Gandalf’s beer-drinking younger brother) but they’ve retained every ounce of their youthful energy and love of high-volume dynamics. Everyone in the band does their part to make the songs sound great: Murph is a strong drummer, and Barlow plays the affable indie-punk on bass, but for me the biggest treat is watching Mascis’ solos which are fluid and full of technique, despite their “thank god for earplugs” volume. Having never had the opportunity to see Dinosaur Jr. live for myself, I can only imagine the kind of air-moving effect the band must have had in a club like the 9:30.

You might remember that Bug was only thirty-two minutes long, which would be pretty skimpy for a concert, and a bad value for a DVD purchase. Well, for starters there’s a two song non-Bug encore (“Sludgefeast” and “Raisans”), and another two songs from the same show included as bonus features. There’s also a twenty-minute interview segment with Mascis, Murph and Barlow talking to Henry Rollins, which is an interesting experiment (Rollins interviewed them prior to each night’s show on the East Coast leg of the Bug tour) but also awkward since Mascis, by all accounts Dinosaur Jr’s leader, doesn’t say much. Rollins shouldn’t take it personally though: he doesn’t talk much during the concert either, preferring to follow the teachings of Aerosmith and “let the music do the talking”. There’s also a backstage interview with the six fans who shot the concert, a clip of Henry Rollins talking about the history of The 9:30 Club, and an interview with J (who, yet again, barely says anything) and director Dave Markey, who shares interesting stories from the band’s past. Well done.