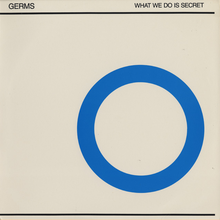 This Germs EP is a strange one. It was originally released in 1981, soon after the death of Darby Crash, collecting odds and ends from the band’s chaotic three-year run. It begins with a cover of Chuck Berry’s “Round and Round” from 1977, when the band were in their infancy. The performance is so sloppy that it threatens to go completely off the rails at any moment, and even a simple count-in seems beyond their skill set at this embryonic stage. The three songs from 1978’s Lexicon Devil EP are a much better indication of The Germs’ strengths. Sure, “Lexicon Devil”, “Circle One” and “No God” are sloppy proto-hardcore blasts, but they’re anything but generic thrashers. Beneath the wild exterior lies something mercurial and poetic in Crash’s performances. It’s too bad the lyrics weren’t included, because they’re actually really good. “Caught In My Eye” is an outtake from 1979’s GI album. It’s slower and more focused than the Lexicon Devil tracks, and you can really feel the white-hot intensity, especially in Crash’s animalistic vocal gnarls. It ends with two songs from the final Germs show, on December 3, 1980 at The Starwood in Los Angeles, just days before Crash’s suicide on December 7th. Darby sounds fall-down drunk, but the sound quality is pretty good. That counts for something right?

This reissue is a Record Store Day exclusive, limited to 2,250 copies. It comes on 12″ blue vinyl, which doesn’t match the shade of The Germs’ infamous blue circle logo as well as you would expect it to.