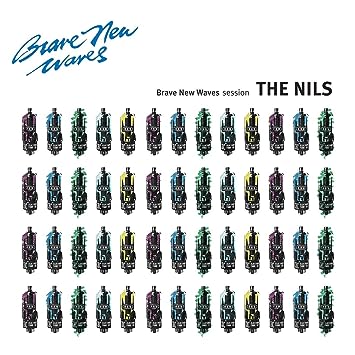 The Nils recorded these nine songs in a single session at the Canadian Broadcast Corporation (Canada’s version of the BBC) in March of 1988, one year after the release of their self-titled debut album. The session captures an awkward time in Nils history, right after bassist Guy “Chico” Caron quit in response to their record label (Profile) abruptly sending the band home from a promising US tour due to bankruptcy. Caron’s absence forced The Nils into a musical version of a power-play defense, pushing second guitarist Carlos Soria over to the bass, while giving singer Alex Soria no choice but to turn the volume on his guitar way up to try to cover the gaps . While this loud-guitar trio version of The Nils doesn’t have some of the prettier nuances of their studio recordings, oddly enough, they sound a lot like Dinosaur Jr. here; especially with Soria’s slurred vocal style. There are six band originals – “River Of Sadness” being the strongest of the bunch – and covers of The Who (“Mary Anne With The Shaky Hand”), Tim Hardin-via-The Small Faces (“Red Balloon”) and Men Without Hats (“Pop Goes The World”). It’s their cover of Men Without Hats (you know – the “Safety Dance” band) that resonates the most because it hints at how easily a few poppy hooks could have turned the band’s fortunes around, had Profile’s bankruptcy not forced them to wait on the sidelines for four years during the alternative rock boom of the early-’90s. Brave New Waves Sessions ends with an interview with CBC host Brent Bambury wherein the band discuss the origins of several songs on the disc, while sporting some of the thickest Canadian accents ever committed to tape.