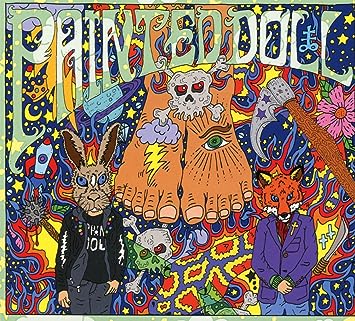 One of the great things about music is that it gives people from different walks of life something to bond over. Such is the case with Painted Doll, a band that came about when Dave Hill, a writer, comic and musician who’s played Cobra Verde, and Chris Reifert, a veteran death metal drummer whose lengthy resume includes time in Death and founding Autopsy, bonded over their love of ’60s/’70s music. That bond ultimately led the duo to test their musical chemistry out in the studio, which in turns leads us to this ten-song debut album on New York indie label Tee Pee. Once you get over the shock (and perhaps even hilarity) of hearing Reifert, a guy you may remember from such gore-drenched “classics” as “I Sodomize Your Corpse” and “Necrocannibalistic Vomitorium”, playing music that takes cues from Love, T.Rex and The Kinks, the songs start to speak for themselves…and they’re really good! Perhaps Painted Doll won’t blow your mind with a shockingly fresh take on hard-psych (in fact, album openers “Together Alone” and “Carousel” are almost completely indebted to “Don’t Fear The Reaper” and “Cosmic Dancer”, respectively), but Hill delivers sugary power-pop hooks and harmonies to perfection, the guitar work is unexpectedly accomplished, and Reifert’s drumming is powerful yet tasteful (don’t worry sissies – no blast-beats here!). They also stop short of leaning on any period affectations; so as much as Painted Doll’s songs are inspired by the sounds of yesteryear, they stay modern and completely free of retro-kitsch. Highlights include “Hidden Hand”, “Eclipse” (which sounds a bit like Monster Magnet – a band Painted Doll have played shows with) and the closing Doors-y cover of “I Put A Spell On You” where Hill wisely keeps the vocals on simmer, avoiding any temptation to try and out-do Screamin’ Jay Hawkins’ downright possessed original.