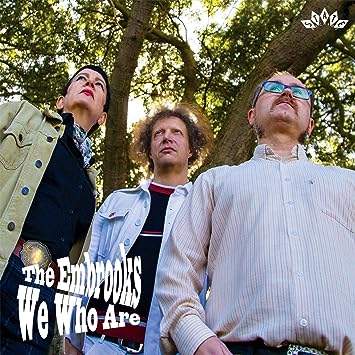 After a decade-long hiatus The Embrooks returned to action in 2016 with a killer two-song single that whetted my appetite for more. Now they’ve gone back to the lab for a bit (which, in this case, is their own North Down Sound studio) and emerged with a new full-length, We Who Are, that doesn’t disappoint in the slightest. The band piece together the best elements of that brief period from 1964 to 1967 when rock groups began to incorporate exciting shards of experimentation into their sound, but hadn’t fully arrived at psychedelia. Picture mid-60s highpoints like Roger The Engineer, Face To Face, Between The Buttons; U.K. Mod bands like The Sorrows and The Creation, with a dash of pre-punk high-energy excitement from The 13th Floor Elevators, or even pre-Kick Out The Jams MC5, and you’ve got a pretty good idea of what this trio of scene-vets are up to. No matter the year, there’s always a handful of bands out there mining this territory (some of the current crop are signed to the band’s label, State Records) but the Embrooks are a class above at this point, with fiery performances (everyone’s on point, but Lois Tozer’s drum attack in particular impresses throughout), great production, and high quality songs. Highlights include the double-time rave-up at the end of “Don’t Look At Me” punctuated by a flute of all things, a toughened up cover of The Hollies’ “Have You Ever Loved Somebody,” and the slinky 12-string guitar riffs on the folk-rock inspired “Til Tomorrow.” Great songs, great musicianship – this one’s got it all. I just wish I’d known about it in time for my year-end Best of 2018 list.